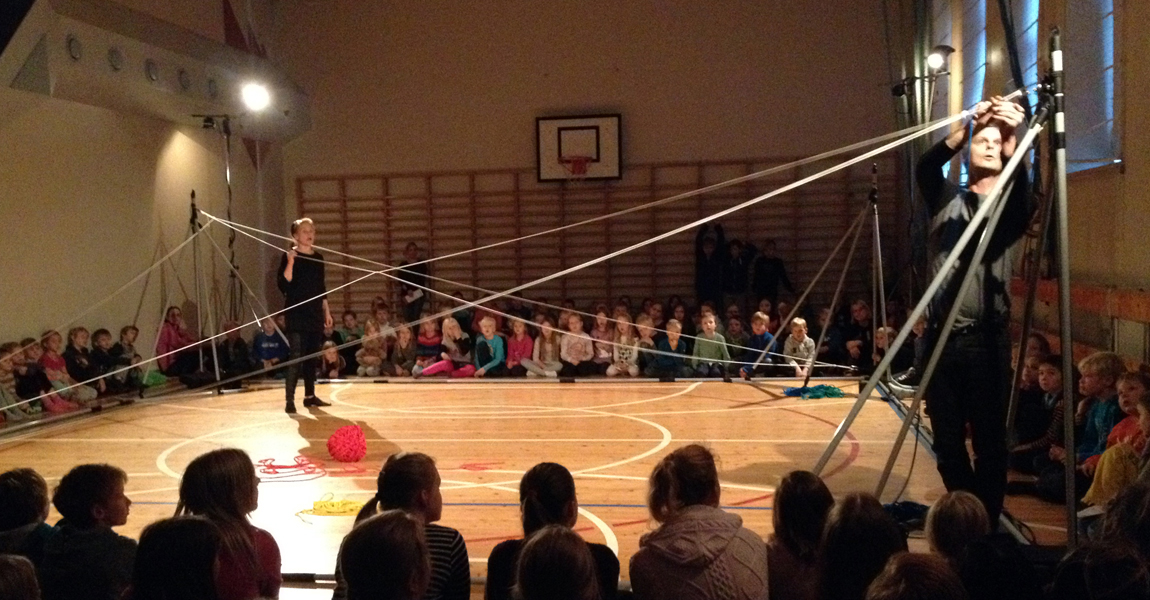 ”The gripp of director Tuomas Laitinen is, from an external perspective, ridiculously simple and just because of that genius. A red rope is sent out to the audience and soon the whole crowd of children holds it in their hands. It is an extremely touching sight and at the same time a very beautiful scene. Concepts like the labyrinth and the red thread become all at once both verbal and tangible things.”
Isabella Rothberg, Huvudstadsbladet

Totem Theatre’s RD THRD (= the red thread) is a participatory performance for children from 6-12 years. It tells about what moves between people through the myth of Minotaur.

What binds us together? How do we let go? The journey towards the center of the labyrinth is told by two actors and a big pile of ropes. The ropes are used to tie people up, visualize messy family relations of gods and men, manifest commitment, offer a safety net, create a labyrinth and so on. The performance toured in schools for the entire year of 2014 and is still in the program of Totem Theatre.

”An auntie like me has to wipe her eyes – so devoted is the audience of lower elementary school students in participating in building and solving the RD THRD. The performance immerses them into it’s multisensory world.

Tuomas Laitinen’s direction finds an angle to the tale that uses children’s natural need to learn. RD THRD dives into the roots of western culture, the knowledge of which helps to understand the human history regardless of the measures of natural science.

A warm circle of small humans is formed around the stage. It has power.”

“In Tuomas Laitinen’s direction the perceptional skills and interests of the target group are clearly well thought and experimented.

Rissanen and Lappalainen are just wonderful. They are strongly present and react to the impulses form the audience in a sensitive way, but hold their roles at the same time. The gym hall of a school can be as worthy a stage as a stage of a big theatre.

The succesful direction of Tuomas Laitinen. The inventful dramaturgy of Katariina Numminen, the skillful performers, the classic story and, most importantly, a thrilled audience make an excellent performance.”

”The flamboyant Minotaur makes children laugh. The whole of the performance is hypnotically engaging, and even the smallest members of the audience are fixed to follow it to the very end.”