”A purifying journey to the human mind. The sensitivity, courage, expressional power and charisma of Syrjäkari make the experience special. Every detail is deliberate. The physical, visual and sonic spheres each form their own installation all of which speak the same language. The name Solta is Portugese for letting go. The feeling of the spectator leaving the performance is exceptionally liberated and purified.”
Irmeli Haapanen / Turun Sanomat

Solta – A Journey to the underworld was a solo performance about depression, dressing and undressing, mythical and ordinary. As sources of the piece we used Heidi’s experience of clinical depression, the Greek myth of Kore and Persephone, actor Heidi Syrjäkari’s history of roles as an actor and Finnish tradition of lamentation songs.

We used the myth to work with depression – the strength drawn from darkness, the journeying between the two worlds and the possibility of depression as a liminal space through which true personal transformation can occur. Solta is Portuguese for letting go – we tried to let Heidi pass through an experience of letting go and to offer the same to the audience.

As for the process of creation, we had a wonderful core family of three, myself and the dramaturge Emilia Pöyhönen as the parents and Heidi as our beloved child. Tuomas Rounakari in sound design and Marianne Lagus in light and set design accompanied the core. Tuomas also couched Heidi in lamentational singing, which became the form of the last act of the piece. When the final piece took form, Heidi, a musical theatre actor, ended up barely singing and Emilia, who is an amazing playwright, did not write a word. 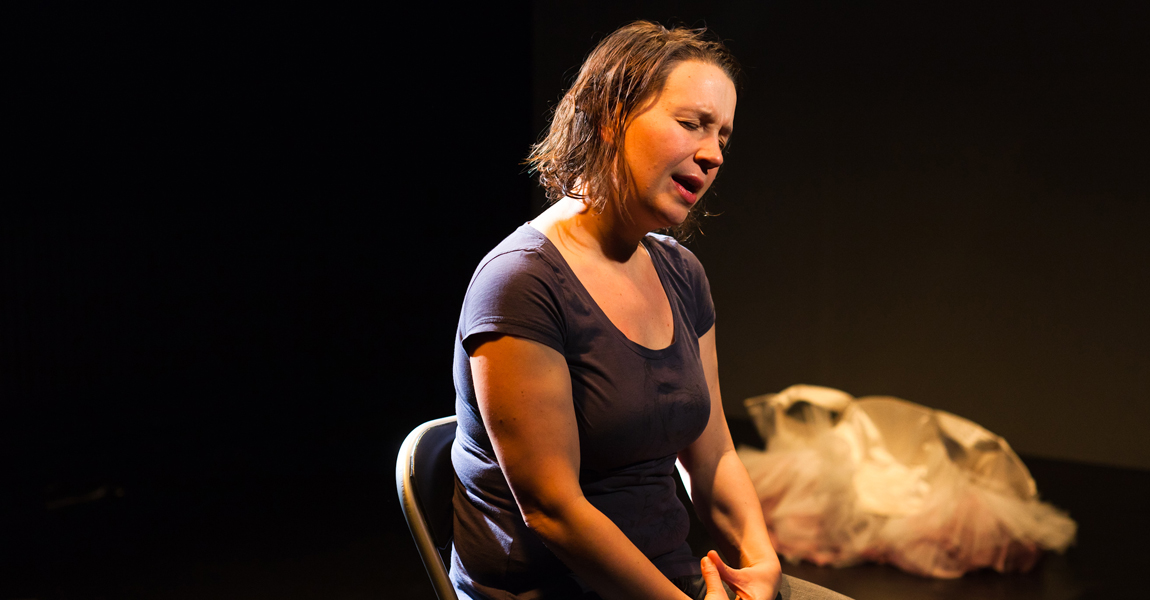 ”Solta is a memorable solo, in which depression becomes a shared experience. Realized with the tools of contemporary musical theatre, it is a proof of the power of performance art. It shows that expression based on physical presence and momentaryness can transmit experiences, that may be impossible to verbalize.

In this world a twofold fear reigns: the fear that nothing will happen and the fear that anything might happen. Senses sharpen, but they don’t help much, since the habitual cause and effect -relationships don’t apply in this world anymore.

Music, sounds, lights, costumes and set are minimalist, insightful work, creating an appearance of simultaneous normality and threat. This is what depression is about – borderlines between banal slavic misery and madness.

Solta is Portugese for letting go. Only by experiencing the performance you can realize how succesful the choice of title is.”

”A touching journey into depression. Solta brings the rituality of theatre alive both in an archaic and a contemporary way. It hides within itself several levels from Greek mythology to shamanistic depths.

The personal and embodied nature of Syrjäkari’s stage presence is close to performance art. The direction of Tuomas Laitinen and the sounds of Tuomas Rounakari carry her. Solta helps the audience to acknowledge their own grief and give time to it – and finally also to let go.”

”Hell is a silent place. Insigthful depression and weird sex in the basements of the mind. The performance analyzes the occational strangeness of the other sex in a charmingly perceptive way.

It ends in a touching way to a lamentation song, which disarms and weaves the bodily and metaphorical aspects of the performance into words. It gives a dubble gift to the spectator: the chance to share an experience and the solace of the song.

All in all, the piece, dealing with depression, exclusion, womanhood and shame, is entertaining and yet serious performance art.”

“The feeling of communality is strong.”